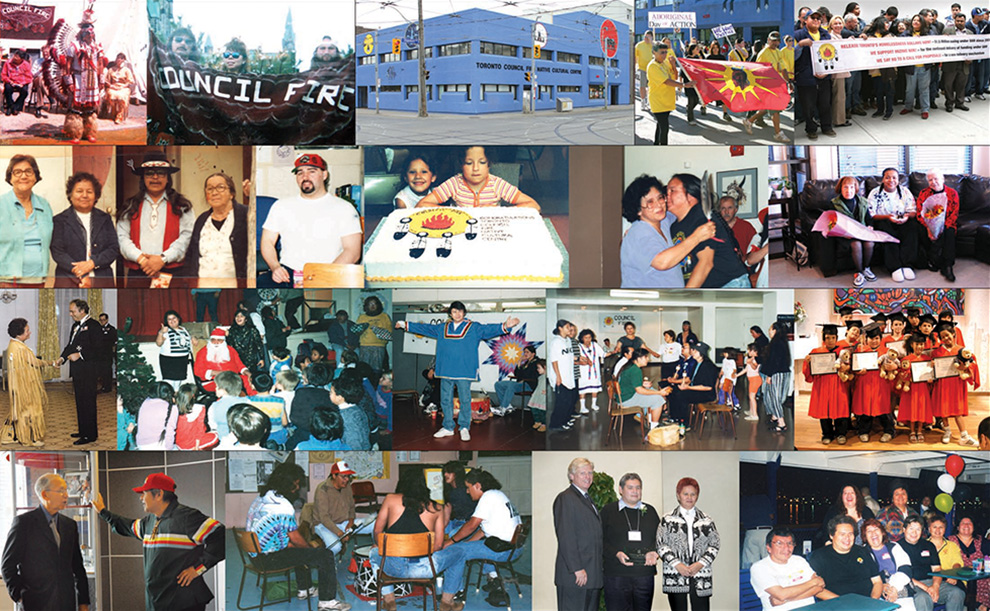 COUNCIL FIRE began in 1976 with a small group of people meeting for weekly worship at St. Barnabas Church. They recognized that increasing numbers of Native people were gravitating to the downtown core and many of them were becoming homeless.

On June 1st, 1978, COUNCIL FIRE was given a small space at All Saints Church at Sherbourne and Dundas; and it was there that a "centre" began to take shape. The majority of those visiting COUNCIL FIRE were young men between the ages of 16-36 who had left their home territories; come from institutions or traveled from other urban settings.

After regular potluck dinners became a popular event (serving as many as 150 per sitting), the venture became a funded program serving all nationalities. Additional programs such as word- processing and literacy/numeracy courses were created and the necessary support services added.

As a result, COUNCIL FIRE began to attract and serve a client base of infants to seniors, as well as those new to the GTA. The drop-in area in particular became a popular place to meet with friends, have a coffee, and play bingo. Eventually other services were made available like information on affordable housing, support services such as a foodbank and a seasonal clothing depot. Equally important were the spiritual and personal services which covered a broad range of needs and resources.

In May of 1997, COUNCIL FIRE purchased the building at 439 Dundas Street East, establishing a permanent home for the programs that it had developed over the years. The additional space has allowed for an expansion of the support services and skill development and training initiatives offered by the Centre.

COUNCIL FIRE is going through a period of restructuring and revitalizing. The Centre envisions providing the same level of quality support and services as it grows along with its community.